Catholic Charities USA received a generous donation of over 200,000 pounds of a chicken and pork chorizo blend that was distributed over December and January to over 11 member agencies from San Diego to Nashville with multiple stops in the Midwest. The donation of the product and transportation to local agencies, was made possible by Evergreen Trading in New York, NY.  Worth approximately $1.5 million at market rate, the chorizo was distributed to needy individuals through the various food pantries operated by our member agencies.

One of the recipients of the chorizo was Catholic Charities Imperial Valley in the Diocese of San Diego. The area served by the agency spans both San Diego and Imperial Counties. The economic and hunger statistics for Imperial County are shocking.  24 percent of the population is below the federal poverty level. The overall food insecurity rate is 17 percent and the childhood food insecurity rate is 33 percent, the highest in the State of California. 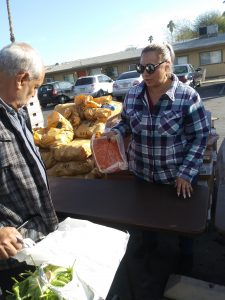 “As soon as Jane presented this opportunity from Evergreen Trading, I immediately applied on behalf of one of our community partners, the Imperial Valley Food bank, knowing the gift of 15 pallets of frozen chicken and pork chorizo would be shared with food assistance providers throughout the region”, said Lisa DuMolt, Catholic Charities Food Resource Center Manager. “This incredible donation will have an impact on providing food to Imperial Valley residents in need,” she added “and is a great example of local community partnerships coming together to address the issue of hunger.”

Catholic Charities USA is very grateful for this donation during the holiday season that enabled us to provide nutritious food support to the vulnerable.