“…with their patience worn out by the journey, the people complained against God and Moses” (Num 21:4).

Who doesn’t have sympathy for the Israelites here? Forty years of traveling in the desert, moving slowly toward the promised land, they experienced many hardships. Daily tasks and taking care of family were challenging. Resources were scarce. People got sick; some died. No doubt delays and detours were required along the way. Wishing the journey over and the promise realized is an understandable feeling.

Some of the Israelites, however, began thinking that the promise was unattainable and a return to Egypt was preferable to wandering in the desert. Returning to Egypt, of course, meant a return to slavery. Such a desire indicates a weariness beyond the challenges of a difficult journey; it suggests a loss of faith. They also forgot about God freeing them from slavery. 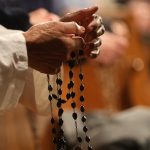 God sends saraph serpents to prod the people out of their despair. Admitting their sin, the people ask God through Moses to stop the snakes. It’s interesting what God does. Instead of wiping out the snakes, he tells Moses to mount a bronze one on a pole so that “whenever anyone who had been bitten by a serpent looked at the bronze serpent,” he or she would live. God sets up the possibility for people to make an act of faith, which replaces their despair with hope.

The Church sees the bronze serpent as foreshadowing the crucifix, which is a symbol of the Christian faith. Like the Israelites, followers of Christ can be dragged down by the journey and tempted with despair. Does God even care about the state of the world or those stuck in poverty or people gripped by desperation or innocent people massacred in a war? Gazing at Jesus on the cross reminds us that the way of faith does not evaporate hardships, but neither does it end at death. Faith centers us on the hope of Easter and frees us to love on earth, even when others choose to “return to Egypt.”